The mushroom industry has been a feature of the Irish agri-food landscape for many years, just as the growing tunnels have. When the industry kicked off back in the 1990s – small mushroom farms seemed to pop up all over the countryside and many of us had our first part-time jobs picking mushrooms at the weekends and during school holidays.

Since those early days, things have changed immensely. The industry has grown from being dominated by small scale growers to being a large industrial process led by science and innovation. In fact, mushrooms are the no.1 exported food from Ireland!

If you haven’t stepped foot on a mushroom farm in a while, you’d be surprised by what you might see!

This evolved to the bag system that expanded rapidly in the 1980s and 1990s. Mushrooms were grown in bags of compost, pickers sat on small carts with a tray to set the punnets on, moving up and down the tunnel.

Over 60% of production went to England at this stage.

This bag and tunnel growing system is what many people who worked in the industry will recognise – a common sight across rural Ireland and a workplace for everyone from the family to neighbours. Managing the tunnels required a high level of skill and attention, and the high quality of produce made for high growth and exports.

Then came the Dutch tray system

Mushrooms are grown on tiered shelves filled with compost substrate and pickers sit on special lifts that move along each level.

A layer of casing soil (black peat mixed with lime) is applied over the substrate. The casing soil acts as a water reservoir and aids the growth of mushrooms. It usually takes six weeks from when the substrate is filled until the crop is finished.

During this period, the crop will produce three flushes (crops) of mushrooms.

The growing environment is computer controlled to give constant temperatures of between 18°C and 25°C – the perfect condition for controlled growth. Humidity is controlled too.

The mushroom industry is the largest horticultural sector in Ireland. It has a farm gate value of €119million, of which approximately 85% is exported to the UK. It currently employs over 3,500 people and is set to keep growing! 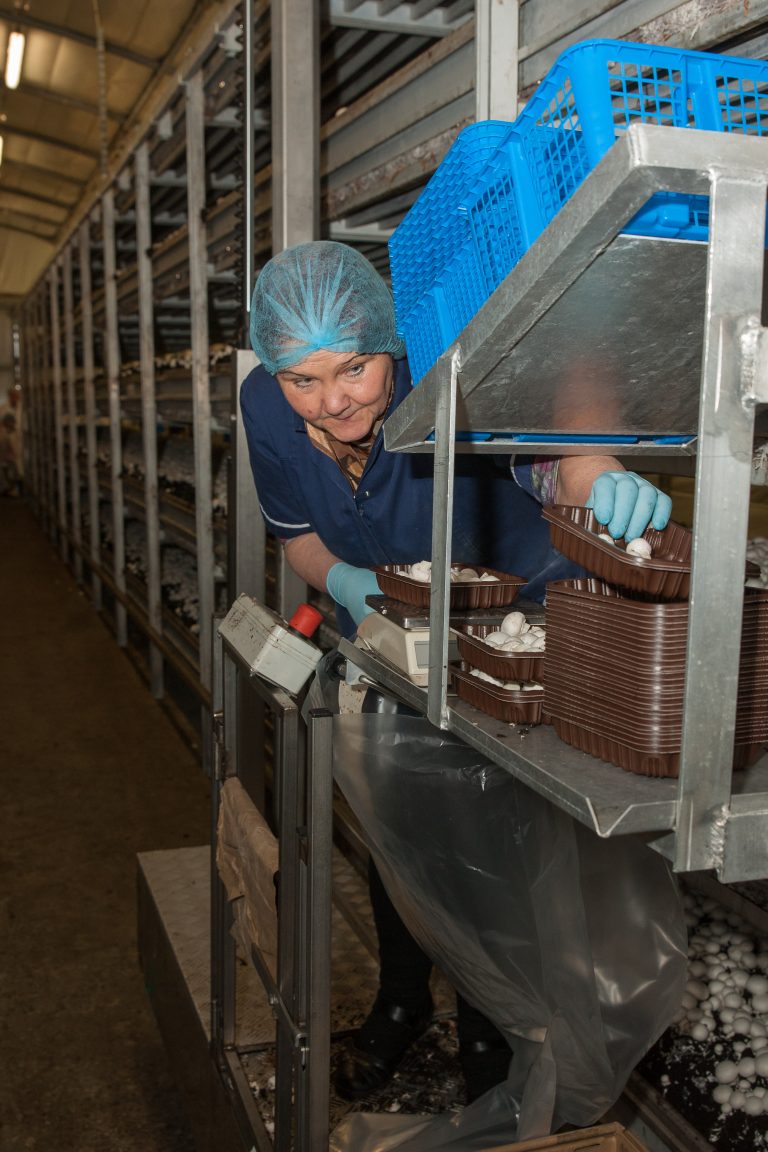 8th March 2022
We use cookies on our website to give you the most relevant experience by remembering your preferences and repeat visits. By clicking “Accept”, you consent to the use of ALL the cookies.
Cookie settingsACCEPT
Manage consent

This website uses cookies to improve your experience while you navigate through the website. Out of these, the cookies that are categorized as necessary are stored on your browser as they are essential for the working of basic functionalities of the website. We also use third-party cookies that help us analyze and understand how you use this website. These cookies will be stored in your browser only with your consent. You also have the option to opt-out of these cookies. But opting out of some of these cookies may affect your browsing experience.
Necessary Always Enabled

Any cookies that may not be particularly necessary for the website to function and is used specifically to collect user personal data via analytics, ads, other embedded contents are termed as non-necessary cookies. It is mandatory to procure user consent prior to running these cookies on your website.